Jet Magazine’s Starrene Rhett Rocque got together with DJ Paul to discuss his influences in Southern cooking, and why he decided to launch his own BBQ sauce and rub line! Read on:

DJ Paul has come a long way from Memphis but as the saying goes, he hasn’t forgotten his roots. Paul rose to fame with Three-6 Mafia, a group that went from local celebrities to winning an Oscar for scoring the theme song to 2005’s Hustle and Flow. Eventually, the group became reality TV stars by headlining their own show entitled, Adventures in Hollyhood—which aired on MTV—and then to compete and win on VH1’s Famous Food.

For DJ Paul, the latter victory wasn’t just about bragging rights it sparked the inspiration he needed to consider cooking professionally. Today, the restaurant gained from the Famous Food win is no longer in operation, but DJ Paul has moved to the next phase of his culinary career—peddling a barbecue rub and sauce inspired by his southern roots, blended with his love affair for Asian and Mexican food.

JETmag.com caught up with the entrepreneur to chat about his career as a burgeoning chef and how he balances his new business ventures with being an artist.

There’s a heavy emphasis on food in the South so as a southern man, what role did food and cooking play in your life?

My family—we didn’t have the every Sunday after church get together and cook and all that. I don’t really know why. I think my mother was just sick of everybody after church and didn’t want to look at us anymore. That’s kind of how she was. But it was a point in time where I’d go to my grandmama’s house and she would have a get-together going on and we would do that. But we didn’t do that that much. My momma would cook but I was never really in the kitchen with her while she was cooking so I didn’t learn the family recipes or none of that stuff, but I did learn some stuff from her about cooking here and there. But I didn’t learn a whole lot. Most of the cooking I learned is from what I’m watching on TV right now.

You’ve come a long way from peddling mixtapes to selling barbecue sauce. That’s a good look for people to see the versatility in hip-hop.

CLICK HERE to read the full article at JetMag.com 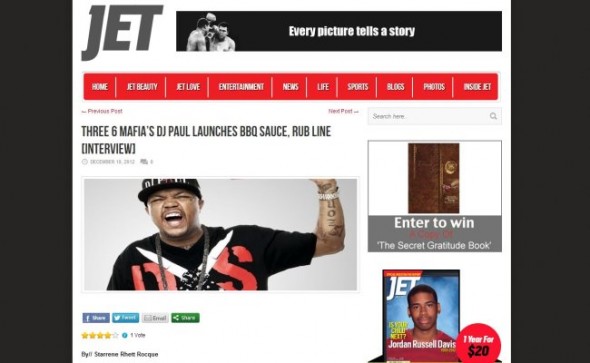