Da Mafia 6ix’s “Triple 6ix Sinners Tour” kicks off tomorrow in Memphis as the first stop of the 50-city tour. DJ Paul spoke with some sites about what surprises sinners can look forward to including an appearance by Lord Infamous’ casket. Read more below!

DJ Paul says Da Mafia 6ix’s forthcoming Triple 6ix Sinners Tour will feature a special guest. “Gangsta Boo is going to be there, so will Crunchy Black, Koopsta Knicca, and a special appearance by Lord Infamous,” DJ Paul says in an interview with Toledo City Paper. “We’re bringing his casket out. We’re bringing it to every show. I wanted him to be there. I’m that kind of guy—a weird, kinda creepy kind of guy. I had to pay a lot of money to get an extended tour trailer that would fit his casket and all of the merch.”

. At 37, Paul is still very much a player in the rap game. In fact, after 23 years of writing and recording, during which time Three 6 Mafia sold millions of records and helped spread the Memphis rap style around the world, Paul and his cohort have opened a new chapter in the group’s story.

We got some different opening acts. We’ve got a guy opening named Twisted Insane, and I think he’s signed to Tech N9ne. Basically we’re about to go on a 50-city tour in 55 days. Even the days we have off, I’m flying from the tour and DJ-ing and doing solo gigs at places. 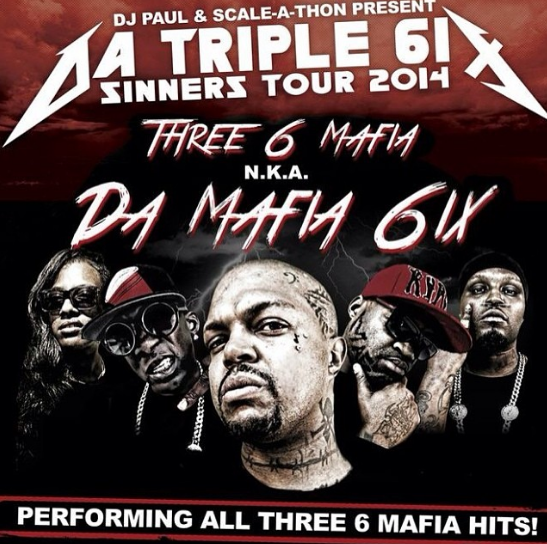